Swings #2 : The ocean's role in climate change revealed thanks to marine particles

How does the ocean "digest" carbon dioxide from the atmosphere? Partly thanks to the biological pump: phytoplankton trap the carbon dissolved at the surface through photosynthesis. When phytoplankton dies, it creates particles that sink to the abyss and are transformed. To better understand this biological pump, the SWINGS expedition is sailing in search of these particles.

Tracking and analysing marine particles: what a challenge! Catherine Jeandel and her colleagues have to develop much meticulous strategies than those needed to find a needle in a haystack: marine waters contain only between 50 and 10 micrograms per litre of particles.

In this southern region, it circulates the largest current in the world. The Antarctic Circumpolar Current carries chemical species between the Atlantic, Indian and Pacific Oceans. Its flow is 140 times the sum of the added flows of all the world's rivers. In the Ocean, the biological pump acts on the water column, while the circulation ensures horizontal and lateral transport of matter, all of which is still little known.

"The media use the image of the carbon sink, because there is a vertical movement of particles, but we are also trying to understand the global circulation of these particles.”

Quantifying, analysing, characterising and tracing the cycle of physical and chemical transformation of these particles provide scientists with precious information to discover all the secrets of the oceans.

These marine particles have three main origins. Let's focus on those that play a fundamental role in carbon sequestration. Everything happens in the water column.

At the surface we can find the nutrients, including trace metals (see the article Swings #1) and light. These two parameters are essential for the photosynthesis of the phytoplankton, so that it transforms carbon into organic matter for the development of its cells and skeleton. Some of these algae that live on the surface of the sea protect themselves with a calcareous shell, others with a silica shell, and still others have no mineral protection. In the family of calcareous algae, we find coccolithophores and in the family of algae with a silica skeleton we find diatoms, which are omnipresent in the ocean. Their life cycle is very fast, maximum three weeks. When they die, larger particles are formed by coalescence, which fall into the water column as "sea snow” and they become part of the sediment on the seabed. During this fall, bacteria attack them, zooplankton graze on them and both digest them. This attack re-mineralises all the initially solid mineral salts which return in the dissolved form.

A permanent round trip takes place between the dissolved and particulate carbon fractions. The removal of these particles becomes more complex with depth as the bacterial activity develops. In fact, the fraction of matter that comes out of the first 100 metres represents about 10% of what has been produced by photosynthesis at the surface. This proportion only represents 1% of this matter after the attack by bacteria and zooplankton.

At the surface, it is not only marine particles that emanate from biological activity. There are also those coming from the earth, known as "lithogenic" or "terrigenous", which are dust transported by the winds or deposited by rivers. Quantifying these inputs is essential because they are the ones that provide the "vitamins" of phytoplankton. Finally, there is a third source of marine particles: hydrothermal sources. These are found at depth. When waters that have percolated through fractures in the oceanic crust and have become enriched with dissolved chemical elements encounter cold, oxygenated seawater, a "pressure cooker" effect is produced. Sort of geysers explode and matter precipitates into particles of different sizes. (To learn more about hydrothermal source, check out the next Swings #3 article on February 2).

Recovery of seawater from the standard rosette. © Swings, Laurent Godard.

To recover a maximum of water and particles, 12-litre bottles must be deployed via the rosettes. Pumps are also placed in the water column to maximise the collection. These are equipped with a filtration nozzle that allows the water to be filtered directly by immersion. They are attached to a cable and deployed at various depths down to 5 km in order to collect the particles at different stages of their transformation. Thanks to pre-programmed motors, the pumps filter about 900 to 1,200 litres of water in three hours.

Subsequently, several methods of analysis are applied to these samples, some non-destructive, others destructive. The non-destructive methods consist of electronic microscope observation, X-ray analysis or counting the natural radioactivity of the particles. Some counts can be made on board, others on return from the mission in the Observatoire Midi-Pyrénées’s LAFARA (Low Radioactivity Laboratory) underground laboratory in Ariège (France), the Laboratoire des Sciences de l’Environment Marin (LEMAR) in Brest (France), the ETH-Zürich (Switzerland) or Woods Hole (USA).

Destructive analyses consist of dissolving particles in suitable chemical solutions and measuring the concentrations of the elements of which they are composed, some of which are valuable tracers. For example, thorium attaches itself to marine particles, and the analysis of its concentrations makes it possible to estimate the speed at which it falls into the water column. Another example, the isotopic signature of neodymium and the concentrations of rare earth elements make it possible to estimate the origins of the particles and to quantify the exchanges between dissolved and solid fractions. Finally, some tracers (including neodymium) have the capacity to "print" themselves in the shells of organisms, which makes it possible to reconstruct circulations, erosion rates or past biological production thanks to their analysis in the sediments.

Finally, it will be possible to freeze part of the samples at -20°C in order to be able to carry out biological analyses back on land. In order to protect the samples as much as possible, they have to be packed in plastic bags which are then stored in large plastic boxes. The samples must never come into contact with the atmosphere of the boat. A meticulousness to be respected throughout the oceanographic campaign.

Passion and accuracy with Corentin Clerc

PhD student on the impact of gelatinous organisms (jellyfish) on the carbon cycle in the ocean.

I am in charge of the CTD-Rosette (Conductivity Temperature Depth). This equipment allows me to measure the salinity and temperature of the water at different depths and to bring back water samples. I have also developed a computer tool to better choose the locations where samples are taken based on satellite data. We are currently testing this tool.

I have two four-hour shifts every day. During this time, at the stations, I have to be available to take samples. The rest of the time I test this application to guide the research vessel's trajectory.

When I was young, I never thought I would become a modeler. What makes you dream at that age is the call of the unknown, going to places where very few people have been. So, in a way, it's a childhood dream come true for me. I've always loved marine life, whales, killer whales, penguins. When I was young, I was a fan of dolphins, and my mother says that the first word I said was fish!

I did an intensive undergraduate course in Lyon (France), then I entered the École normale supérieure (ENS) in Paris (France), in the biology department. I spent a year in the geosciences department of the ENS before doing a master in science in mathematics and modelling. I am currently in my second year of thesis. I'm studying the impact of gelatinous organisms such as jellyfish on the carbon cycle in the ocean.

What do you do to relax on board?

I love photography. I take pictures of landscapes. I particularly like the lighting effects, for example sunsets.

What books did you take with you?

I took scientific literature with me to advance my thesis. I also took a novel, Civilizations, by Laurent Binet.

20 January: Off the coast of Durban

After an intense first days, the whole team arrives at the third station, near Durban, off the coast of South Africa. We encountered Trichodesmium phytoplankton, a chance for the scientists. Discovered in the 1960s, Trichodesmium rises to the surface when the weather is calm and forms accumulations of several hundred metres that drift with the currents. A magnificent spectacle to the naked eye thanks to the brilliant reflections produced by the phytoplankton.

The weather is starting to complicate life on board. Yet the need to recuperate working equipment is indispensable. Due to the sanitary situation, a few materials have remained blocked at the port. A dangerous manoeuvre is required. Two boats are squeezing together: the small barge accompanied by two sailors and the monumental Marion Dufresne with more than 40 scientists on board. A laborious organisation and strategy result.

"A balancing manoeuvre ensued, which consisted of the two ships advancing side by side (at about 6 km/h), the two crew members of the barge hung the bags and pallets on the crane hoist, the crane operator of the Marion hoisted them on board to put them on the platform. But to spice things up, the waves were 2 to 3 metres high!"

After a hectic hour, the equipment arrived safely. A relief for the whole team.

Last link with the land: the transfer of equipment from Durban © Sibylle D'Orgeval.

As good news never comes alone, the masks fall off, the whole crew is COVID-19 negative. Hallelujah!  To celebrate this, a small social event in front of a beautiful sunset. Another relaxing atmosphere. Between boxing, tennis, and table tennis, the scientists can let off steam. Who won the match? A well-kept secret. Of course, the loser must get revenge.

But for the moment, back to sampling. The rosettes take turns. The water stored in the bottles is recovered for analysis. A routine is set up, punctuated by small moments of conviviality. Now the whole crew has got its bearings and is working hard. This week has been eventful and full of twists and turns. How the next few days will unfold, mystery... See you next week to find out.

Waiting for the rosette © Laurent Godard

Swings #2 : The ocean's role in climate change revealed thanks to marine particles 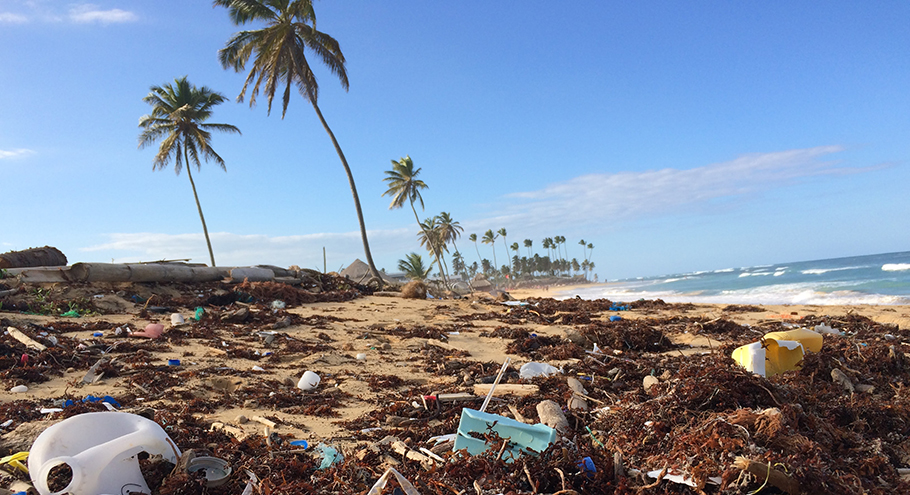 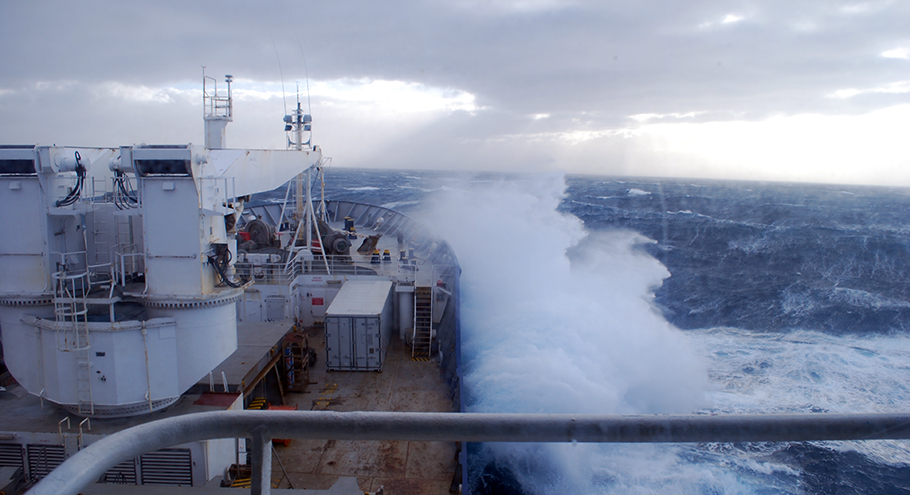 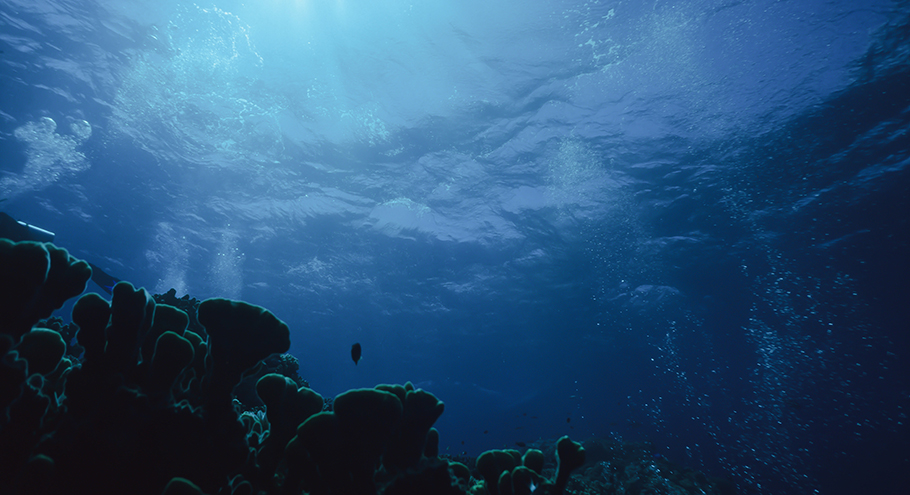